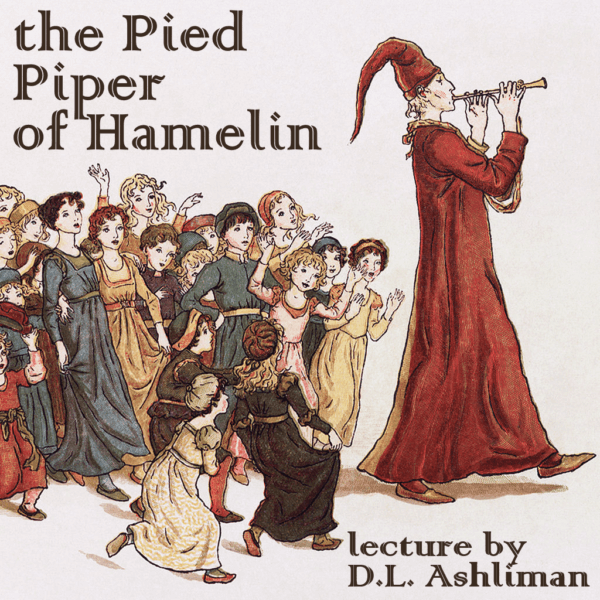 “The Pied Piper of Hamelin”
Lecture by D. L. Ashliman
Not “once upon a time,” but rather precisely on June 26, 1284, early in the morning at seven o’clock (others say it was at noon), a mysterious stranger appeared in the town of Hamelin, Germany, and led 130 children down a street, through the town gate, and into a nearby mountain. This was his second appearance in the town. Earlier, for an agreed upon sum, he had freed the town of an infestation of rats, but the townspeople refused to pay him. His revenge for their duplicity was to lead their children away. Still today, more than 700 years later, the street down which the children were led is named Bungelose (soundless) Street, because no music or dancing is allowed there.

Curiously, other European towns tell much the same story about the miraculous banning of vermin from their streets, and also the disappearance of their children under similar circumstances. These legends are presented as historical events, never as make-believe fairy tales. Could it be that there is indeed a factual basis behind these ancient and wide-spread tales?

About D.L. Ashliman
DL is an emeritus professor at the University of Pittsburgh, taught folklore, mythology, German, and comparative literature at that institution for thirty three years. He also served as a guest professor at the University of Augsburg in Germany. Now retired in Saint George, he is active in Dixie State University’s Institute for Continued Learning. He is the author of five books and numerous articles on European folklore and mythology.