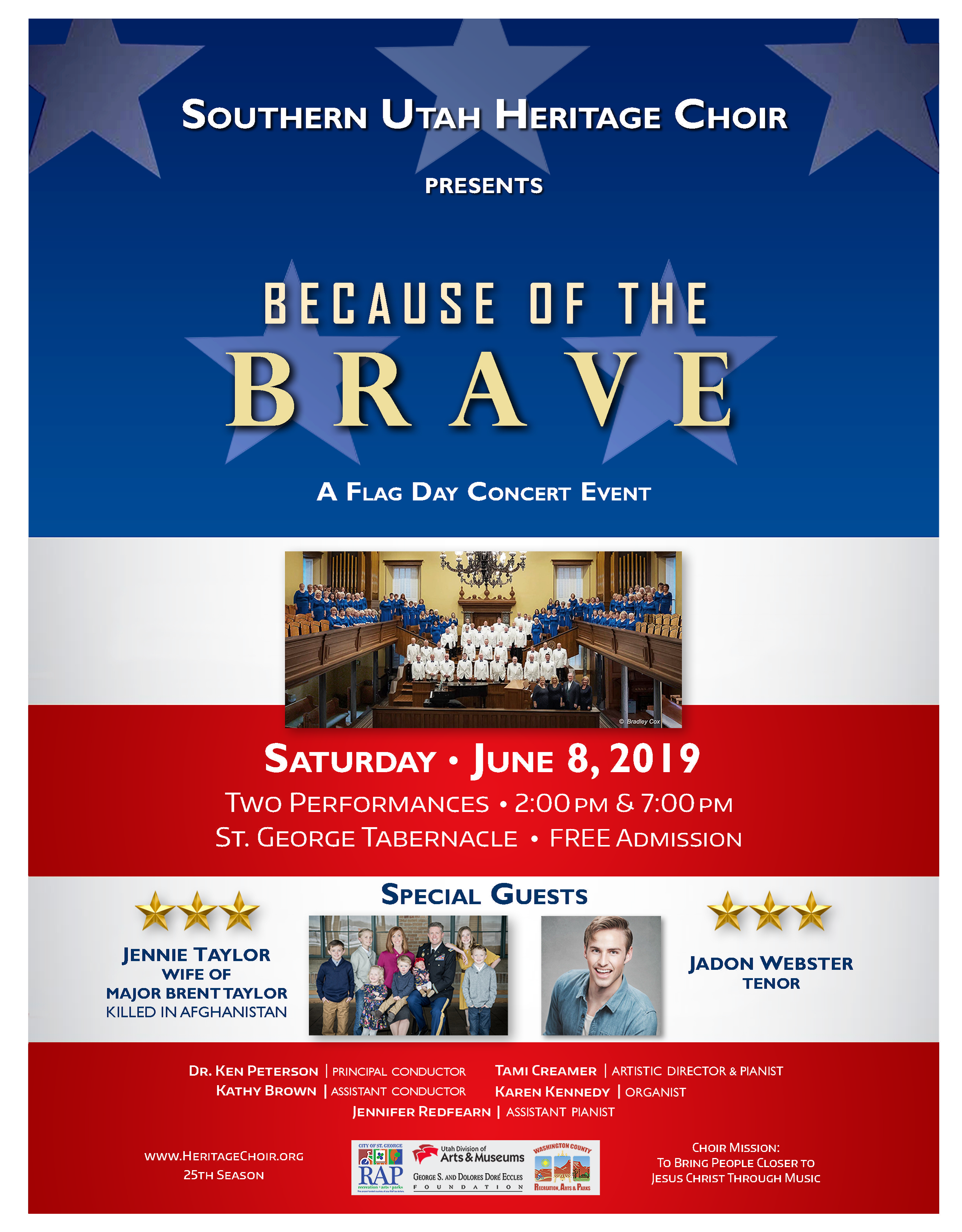 This year’s theme, “Because of the Brave,” honors those who have sacrificed so much both at home and abroad in order to keep America the “land of the free.”  In keeping with tradition, the choir will present patriotic favorites including “The Star Spangled Banner,” “Salute to the Troops,” a medley that features theme songs from each branch of the Armed Forces, Mack Wilberg’s stunning arrangement of “America the Beautiful” and Wilhousky’s rousing “Battle Hymn of the Republic.”  Somewhat less familiar, yet just as meaningful, will be “Homeland,” a piece that employs “Jupiter’s Theme” from Gustav Holst’s The Planets, combined with text that transcends cultural and national boundaries, followed by a delightful new addition to our repertoire, a “traditional song” that pairs an old hymn text with an original melody titled “Sweet Rivers.”  The banjo-like accompaniment adds considerable motion and excitement throughout the piece

Our special guest speaker for this event is North Ogden resident Jennie Ashworth Taylor, wife of Major Brent Taylor who was killed last November while completing his fourth deployment to the Middle East with the United States Army.  An excerpt from Jennie’s bio states, “Brent and Jennie have seven children ranging in age from one to thirteen years old.  Long before they knew they loved each other, Brent and Jennie both knew they loved America, and together they have dedicated their marriage and family to being in the service of their God, family, and Country.”  As a prelude to Jennie’s remarks, the choir will sing “Because of the Brave,” a moving musical tribute to all who selflessly protect our freedoms.

Following Jennie’s remarks, the choir will return with an exquisite Dan Forrest arrangement of a sacred text, “Come to Me,” featuring guest soloist and Santa Clara native Jaden Webster, and cellist Dr. Ka-Wai Yu.  The choir will also perform John Rutter’s “Distant Land,” a prayer for freedom written in 1990 soon after the demolition of the Berlin Wall and the release of Nelson Mandela from prison.

The choir would like to extend a special invitation to all veterans and active military personnel.  Please join us for this free event, Saturday, June 8, at either 2:00 P.M. or 7:00 P.M. at the St. George Tabernacle.