It’s hard to imagine a more perfect base camp for exploring southwest Utah than the scenic town of St. George. It may be just a short drive to Las Vegas and only about 300 miles from Salt Lake City, but St. George’s immediate surroundings are what make it really special.

Vibrant red rocks and steep canyons—including the spots where parts of Butch Cassidy and the Sundance Kid were filmed—beckon with enough recreational opportunities for a lifetime, and you’re just a few minutes from landmarks like Snow Canyon and Quail Creek State Parks, Red Cliffs National Conservation Area, and, of course Zion National Park.

These stunning landscapes are the ideal place for endurance events, and St. George has plenty to pick from: from a silly, family-friendly mud run to a half-IRONMAN and just about everything in between. Here are our 8 favorite picks when you’re ready to really get after it.

The Hurricane Mud Run is the ultimate challenge-by-choice endurance event: the ambitious 5K course is packed with 25 obstacles, including the infamous mud pit. Participants do have the option to skip obstacles they’re not comfortable taking on—although race directors caution that a consequence for this is your friends may give you a hard time. This is a seriously muddy race, so it’s recommended that competitors wear an old pair of shoes and clothes they’re not worried about keeping in pristine condition since they’ll likely be ruined at the end of the 3.1-mile course.

An IRONMAN 70.3 triathlon (also known as a “Half-IRONMAN”) is the among the world’s ultimate endurance challenges. The event consists of a 1.2-mile swim, followed by a 56-mile road bike ride, topped off with a 13.1-mile half marathon. In other words, there’s no such thing as an easy IRONMAN. Competitors consider the St. George IRONMAN 70.3 to be among the best, and the city itself comes to life for the big race. St. George is well-known for having awesome, encouraging spectators. It’s also a North American Pro Championship, which means you’ll be bumping elbows with some of the best athletes in the world.

Formerly known as the Rockwell Relay, the 525-mile Vision Relay is perhaps the best way to experience southwestern Utah on two wheels. Teams of four cyclists take on a total of three legs each (averaging about 44 miles per leg), and spend the better part of two days taking in all there is to see between Moab and St. George. The race offers competitive and non-competitive divisions, depending on how speedy you and your team are feeling, and there are categories for male, female, and co-ed teams. There’s also a Vision Gran Fondo, which is run concurrently with and offers 23- and 64.5-mile routes.

The chip-timed Tour de St. George is run twice a year, in the spring and fall, so it’s both the ideal kickoff and a great way to wind down the Utah cycling season. Cyclists will get to experience many of southwestern Utah’s geological highlights on the ride, including the iconic red rocks, sandstone cliffs, and the surprisingly verdant, cottonwood-filled valleys created by the Santa Clara and Virgin Rivers. The race heads down to the Arizona border and takes cyclists through Sand Hollow and Quail Creek State Parks and past the mouth of gorgeous Snow Canyon. Participants can choose between the 35-, 75-, and 100-mile distances.

The 400-odd-mile, 24-hour Salt to Saint cycling relay might just be one of the best ways to bring together a group of active-minded friends. Sign yourself and your pals up for an eight- or four-person relay (or, if you’re a real rock star, go for a solo endeavor), then get ready to spend a full day and night riding from Salt Lake City to St. George. Legs average around 17 miles, but they vary significantly in difficulty and distance, so you can choose which team member will take on which legs. This means you can safely bring newer cyclists along, while the more seasoned riders in the group can tackle the tougher legs. Best of all, by the end of the race, you and your team will have built up some serious camaraderie—as well as a deep appreciation for the stunning scenery around St. George.

What kind of race doesn’t tell you how far you’ll be riding? With 25 Hours in Frog Hollow, the distance is based on how many laps you can complete on the 13-mile mountain bike course during the race’s 25-hour duration. But this epic event is more than just a race: It’s a chance for the mountain bike community to come together. There’s ample camping space for teams and support crews, which means when you’re not out on the course, there’s plenty of socializing. You can also use the time to rest up and get back some of your energy for the next lap on this no-nonsense course.

Digging deep not only means working hard but working your hardest. 😅 10 miles today and I'm pretty sure this is what my face looked like the entire run. This pic is a #tbt to @st.george.marathon 2015. I really had to #digdeep those last few miles and I got the clenched teeth to prove it. #worlderunners #worlderunners #runningmom #runnersofinstagram #hungryrunner #runhappy #carperunem

Run every October since 1977, the St. George Marathon is regularly mentioned in running-centric publications as among the best of the best—Runner’s World called it one of the top four marathons to build a vacation around, and the magazine has also rated it one of the 20 best marathons in the country. One of the best aspects of the St. George Marathon, though, is that it’s all downhill: It’s a 26.2-mile point-to-point race beginning in the Pine Valley Mountains and dropping to Worthen Park, almost 2,600 feet in elevation below. It’s also a Boston Marathon qualifier—and a great race to aim for a new PR, since its elevation loss means it’s among the fastest marathons in the country.

Looking for one of the most intense mountain bike races in the Intermountain West? The True Grit Epic won’t disappoint. The race runs in March, just before temperatures start to really heat up, and offers 50- and 100-mile distances. The race’s tagline is “Long, Tough, and Technical,” and race directors are careful to remind participants that that’s no joke: “The first 20 miles,” they write, “are over rocky and steep terrain that requires excellent bike handling skills and upper body strength.” The rest of the course navigates boulders, sandy washes, and sandstone, and racers will ride through some of St. George’s best mountain bike zones: Red Bluff, Curly Hollow, and Boomer Hill.

Nothing beats a good night’s sleep before a big race, and St. George offers plenty of options from hotels to B&Bs to camping. You will want to book well in advance when there’s a big event coming to town, though—accommodations fill up quickly!

Read about road cycling in Greater Zion and explore guides & outfitters in the area. 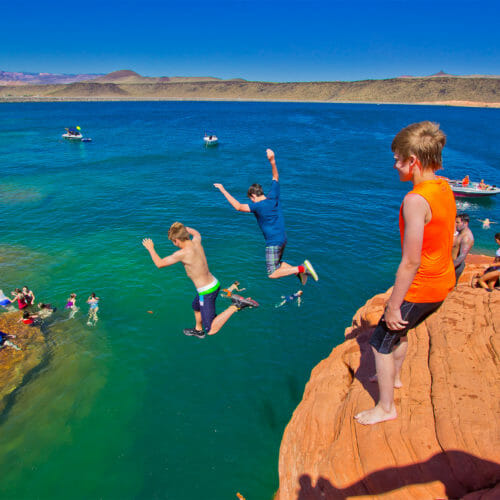 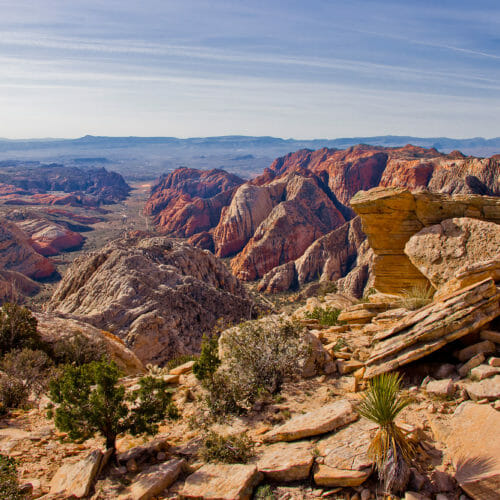 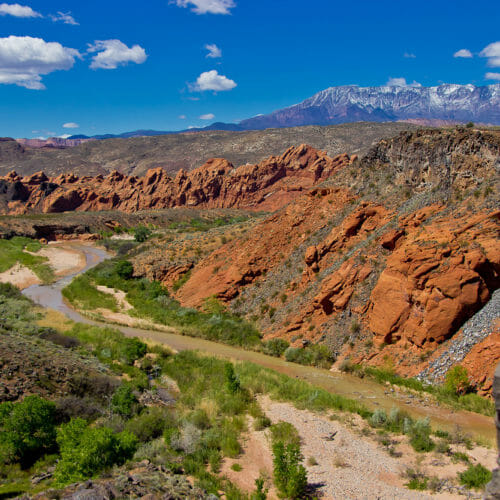